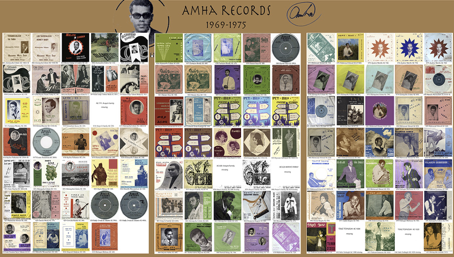 A music lover through and through, a lone pioneer of record production in his country, a daring young entrepreneur, an alternative activist before his time (and something of a combative dude), a gentleman outlaw, Amha managed to circumvent Emperor Haile-Selassie’s state monopoly which did not publish any modern music and banned the importation and production of records.

« I had a gut feeling that it was the thing to do. I thought, nobody’s going to kill me for that. At most I might land in jail for a while. »

The Amha Records catalogue includes more than 100 vinyl references, released between 1969 and 1975. The very essence of Ethiopian pop golden oldies. Nearly all of them have been reissued in the Éthiopiques series. Ethiopian pop is now firmly established, everywhere.

Without Amha Records and Kaifa Records, there would have been no éthiopiques.